An Introduction to Antique Mirrors Pioneer Glass offers standard and custom antiqued mirror glass. This blog is an introduction to the concept of antique mirrors.

Antique mirrors are those dating from a previous era that are considered collectable or valuable. There is no specific time period that defines what is antique, but generally the cutoff is 100 years old. These mirrors can also be referred to as vintage mirrors or collectable mirrors… but those terms are not quite the same as antique mirrors. Vintage mirrors are newer than antiques and date to the 20th century, while collectables are valued by collectors – and these type of mirrors don’t necessarily have to be old.

HISTORY LESSON!
Glass mirrors first began to be used in England in the mid-1600s. They were quite small, as glass was expensive. Over time, mirrors expanded in scope and range to reach the point we are at today.

What makes a mirror antique besides the age? They tend to have beautifully ornate frames and a distinctive character to them. They also tend to have silver backing while modern mirrors are aluminum backed.

Over the last few centuries, mirrors have become one of the most important parts of a home. They are essential furnishings and often create focal points. And people get plenty of use out of mirrors – a British study in 2015 showed men checking their appearance in a mirror an average of 23 times a day and women 16 times. Perhaps some of us will be surprised that men look in mirrors more often than women, but we at Pioneer Glass realize that men often have to look themselves in the mirror and say “what have I done” when they get in trouble with their spouse!

What else makes an antique mirror?

There are many different types of antique mirrors. Thanks to LoveAntiques.com, here is a breakdown:

Baroque Mirrors are from the 17th century and common characteristics include an oval shaped style, frames typically made from Oak or Walnut, frames often gilded with gold and silver and less ornate carvings than the Gothic style. 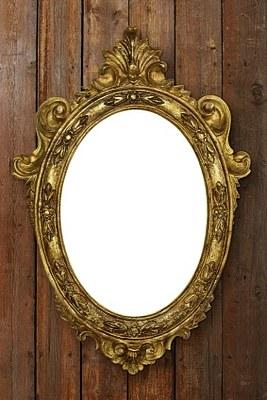 The Rococo styled mirror arrived in the early to mid 18thC.  The style was a rectangular or oval shape with a flat base, gilded gold and carvings at the top of the frames, which were often walnut or mahogany with the carvings often of flowers.

Victorian Mirrors consisted of contrasting designs, mirrors were either dark wood or white with ornate and heavy designs with inspiration often taken from Gothic inspired forms.

The Edwardian style mirrors from the early 20thC were characterized by a delicate style and similarly delicate colours.  The style drew upon different elements and characteristics of earlier styles from past eras.

The characteristics of Mirrors from the Art Nouveau period include sinuous lines, swirling designs and nature inspired motifs.  Pewter frames were common, as were black lacquered frames.  Stained glass was often used to add a delicate finish to the Art Nouveau variety of mirrors.